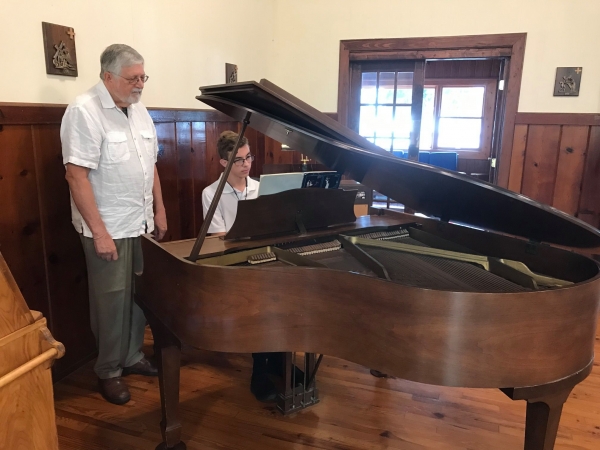 Makes music to enhance Eucharistic liturgies, Holy Week services, and our annual Festival of Advent Lessons & Carols. With our talented Music Director Lucinda Mosher, Th.D., and assistance of our wonderful cantor, Thea Burke, we plan music that will amplify the themes and imagery handed us by the lectionary. Typically the Choir leads hymns, psalms, and service music and providing an offertory anthem every Sunday from the beginning January until the Day of Pentecost and from soon after Labor Day through the end of December. This capable group enjoys many styles and from various historical eras. Invaluable help comes from Barrie Mosher, who prepares the scores used by the choir when chanting psalms. He also has composed or arranged some of our anthems and often enhances preludes, hymns, and anthems by playing oboe, English horn, or recorder. Periodically, the Choir is assisted by guest instrumentalists such as Alexei Romanenko, principal cellist of the Jacksonville Symphony, plus Molly Sweet (clarinet) and Margareta Moczynski (flute) of the Civic Orchestra of Jacksonville.

Music Director Lucinda Allen Mosher brings to St Mary’s more than fifty years of experience as a church musician, multi-instrumental performer, and music educator. She holds bachelor’s and master’s degrees in music, plus two master’s degrees and a doctorate in theology. She has served as organist, choir-director, or supply musician for congregations in the Baptist, Congregational, Episcopal, Lutheran, Methodist, and Unitarian traditions in the USA, Canada, France, Germany, and Italy. Having lectured in the US, Europe, and Uganda, on liturgy, hymnody, and choral music, her essays on these and related topics have appeared in the journals of the Choristers Guild and the American Choral Directors Association. An accomplished performer on bassoon, recorder, and a few other instruments, Lucinda performs currently with the Civic Orchestra of Jacksonville, RareSong Renaissance Ensemble, and the Mosher Double Reed Duo. Dr Mosher has taught music in both public and independent schools. She has been music-director for numerous music-theater productions. In the 1980s and 1990s, she took choral ensembles on concert tours in the US, East & West Germany, the USSR, Poland, Czechoslovakia, and England. Deliberately bi-vocational, Lucinda is well-known internationally as a scholar and consultant in the arena multi-religious concerns. 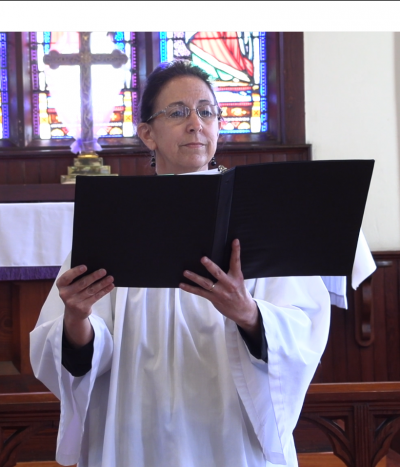 Cantor Thea DeStefano Burke brings to St Mary’s a thorough knowledge of church music, cultivated during her thirty years of service as a Roman Catholic cantor—including twelve years as a liturgist. She continuously strives to ensure that music complements worship. Thea credits her deep appreciation for music to her parents, who introduced her to the great composers at a very young age. She has enjoyed unique musical opportunities in the many places around the world that she and her husband, James, have called home. Her vast and wide-ranging repertoire includes anthems keyed to the church year, sacred and secular classical solo literature, operatic arias, jazz standards, and Broadway show tunes. With a passion for musical theatre, she has played leading roles in Evita, Phantom of the Opera, The Music Man, Oliver, and My Fair Lady. As a soloist with San Diego’s Schola Cantorum Santa Cecilia, Sicily’s Teatro Virgillito, and the Liberta` d’Arte at the annual Bellini Festival in Italy, Thea had the privilege of performing with extraordinary musicians. Here in northeast Florida, she performs frequently with cellist Alexei Romanenko and occasionally with her sister, soprano Leslie DeStefano. 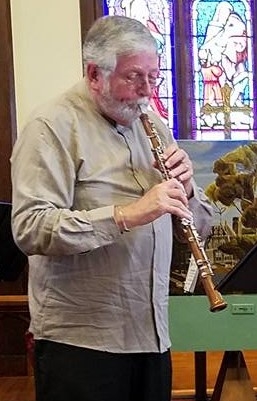 Barrie Mosher assists St Mary’s music program in numerous ways: singing baritone; playing oboe, English horn, and recorder; and composing and arranging musical works to meet our needs. When we must operate in “virtual” mode, he becomes our sound engineer. Barrie holds a BMus cum laude from Boston University and an MMus from UMASS-Lowell. He also has a graduate certificate in Jazz composition from the Berklee School of Music and has completed coursework for a doctorate in composition at the University of Connecticut. Performances of his compositions in New York City, New England, Nashville, northeast Florida, and elsewhere have been well-received. Barrie also holds certificates in computer graphics and graphic design from the New School (NYC). He was a music and computer-applications instructor in public and private middle-and high-schools for forty-five years.

Parishioners Karl and Barbara Shinn will be preforming ...

Cello Fellows - A recital this Saturday - at 2:00pm

St. Mary's Music Program invites you to join us for a re...